July 16 2021
Cyprus in the forefront of turtle protection 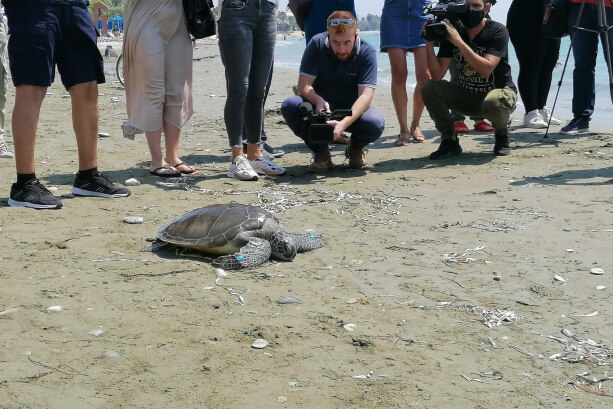 The Department of Environment, through the LIFE Cyclamen project, together with the LIFE Euroturtles’ project team released two sea turtles on Wednesday July 14th, 2021. The release took place at the Cyprus Marine Aquaculture Research Center – which also functions as a Turtle Rescue Center – of the Department of Fisheries and Marine Research in Meneou.

“Androniki”, a Green Turtle (Chelonia mydas) and “Emma”, a Loggerhead Turtle (Caretta caretta), were found injured by citizens and were transported to the Sea Turtle Rescue Center of the Department of Fisheries and Marine Research. After receiving treatment for several months, the sea turtles can now swim freely in the Mediterranean Sea.

The turtle release took place under the LIFE Euroturtles project, which is funded by the EU’s LIFE Programme. The aim of LIFE Euroturtles is to improve the conservation status of the EU populations of the two sea turtle species of the Mediterranean, Caretta caretta and Chelonia mydas. In addition, the project aims to reduce the impact of anthropogenic threats, particularly fishery-related, by the accidental trapping of turtles in fishing gears.

Numerous actions take place under the framework of the LIFE Euroturtles project. For example:

The LIFE Euroturtles project involves nine partners from six countries of the Mediterranean. More specifically, the Cypriot beneficiaries are the Department of Fisheries and Marine Research of the Ministry of Agriculture, Rural Development and Environment and the Oceanography Center of the University of Cyprus.

The LIFE Programme, which is funding the LIFE Euroturtles’ project, is the EU’s funding instrument for the environment and climate action. It contributes to the implementation and development of EU policy and legislation. Beneficiaries of the LIFE Programme are pubic bodies, non-governmental organisations, universities, research centers and institutes, private companies, as well as startups. The National Contact Point for the LIFE Programme in Cyprus is the Department of Environment.